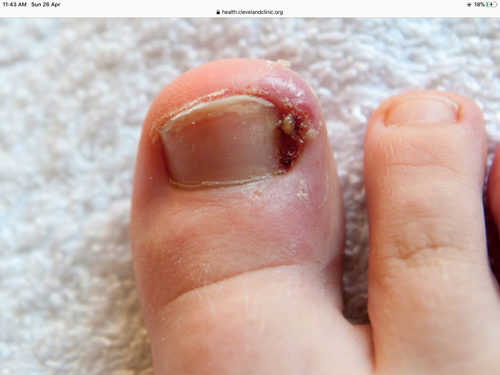 The term "ingrown toenail" is often used to describe a number of problems that lead to pain and discomfort around the nails despite the fact that in many cases the nail does not actually "grow" into the skin around it. These problems most commonly occur on the big toe, however, smaller toes can also be affected.

What causes pain around the nails?

- Improper cutting: A True ingrown toenail (onychocryptosis) is where a small nail spike pierces the skin leading to pain and sometimes infection. This normally occurs at the tip of the nail along the sides when a spike in the nail is left from improper nail cutting techniques or trauma. Nails should be cut along the contour of the toe or straight across with rough edges filed so that no spikes are left on the edges where possible. Nails should only ever be cut down the side by a professional.

- Genetic: Sometimes the shape of the nails that we have inherited from our parents can put us at a higher risk of developing ingrown toenails such as wider nail plates, "chubby toes", or nails that curl around.
- Trauma:  Either an acute injury near the nail or anything that causes the nail to be damaged repetitively (such as playing soccer) can also cause an ingrown nail.  Common traumas include: once off occurrences such as dropping a brick on your toe; or continual micro trauma such as lots of little knocks from activities such as running, sports or wearing pointy-toed shoes.

How is it treated:

Ingrown toenails can be treated two ways. Conservatively or with a simple nail procedure designed to permanently remove a small section of the side of the nail that digs in. Chances are, if your nail is sore enough for you to be researching it, then it should probably be checked out by a Podiatrist.